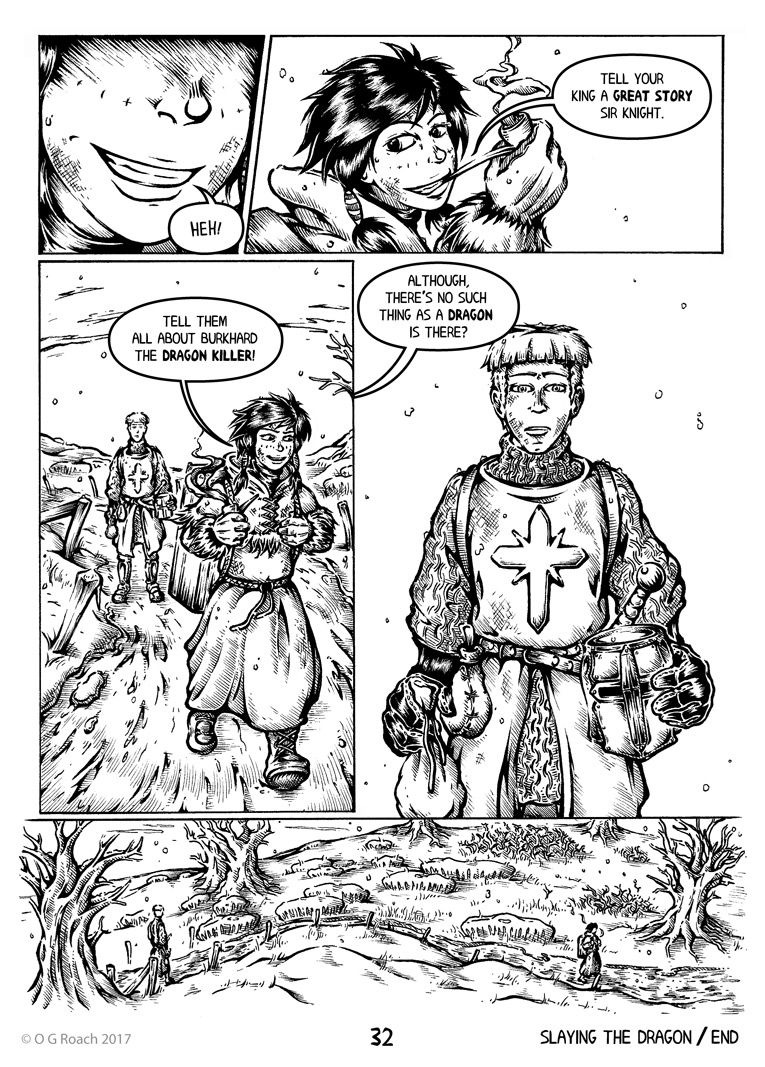 As should hopefully be apparent the intention was always to make something self contained first and foremost, avoiding a frustrating 'to be continued' with an unwieldy drawn out narrative. Put simply I wanted to make something I could potentially abandon after issue 1 without feeling like I let down any readership.

That said, I DO want to continue Apothecary Supreme with other episodic stories so there is a touch of open-endedness here that I'm hoping to exploit.

I really need some space from this before I can properly assess how well everything went, but on the face of it I'm fairly pleased with the end result. Much turned out as I hoped while the things that changed from the script were likely better for doing so.

One of the largest changes was that of Burkhard's character. Originally he was meant to be one shot haughty interloper, but I found myself becoming weirdly attached to him near the end... Probability of him returning? Likely I think.

The BIG problems? Speed - work life interfered A LOT - upload rate and some frankly inconsistent character designs. All things I'm looking to remedy a bit in any follow up I do.

What's next? Some kind of proper cover for the issue for starters and then some kind of print run might be fun.

What now? A fairly lengthy hiatus I reckon while I gear up for more and try to take things in an even more weird, mucky and monstrous direction...

Thanks for reading y'all!

Yes, this wraps it up nicely, I think it was a good idea to keep the character throughout the story, it makes it more complete, not leaving any open ends like "but what about that knight character at the beginning?". And I love contrasts, how those two are so different and also get their quite different rewards at the end :D

Oh yes, a print version would be cool :))

wildcard 28th Apr 2017, 8:20 PM
Quite! Burkhard provides a nice opposite for Greta to bounce off.

The original idea was quite a dry 'weirdo shows up, fixes problem' kind of pitch but I'm a sucker for odd couples. I'm definitely glad I went down this route instead.

demontales 27th Apr 2017, 12:24 AM
Congrats on finishing an issue! This story was very enjoyable, and your art nicely crisp.

I love the atmosphere in that last panel, very peaceful.
edit delete reply

wildcard 28th Apr 2017, 8:12 PM
Thanks for reading and commenting all the way through DT! I always look forward to your comments :)

Funny you should mention that last panel. I'd scripted Burkhard to originally have an internalised caption here - deadly cheesy I decided - and smiling - also felt wrong - Weirdly once I'd drawn his expression and the final panel I really felt the images said everything I wanted to.
edit delete reply

wildcard 8th Apr 2018, 7:07 PM
The moral of the story natch XD
edit delete reply
Post a Comment
(You have to be registered at ComicFury to leave a comment!)